Shannara Wiki - Exploring the Magical World of Shannara
Register
Don't have an account?
Sign In
in: Pages using duplicate arguments in template calls, Males, Characters from The Sword of Shannara trilogy,
and 2 more
English

View source
Wil Ohmsford is a main character in The Shannara Chronicles, based on the lead character of the same name in The Elfstones of Shannara. He is an aspiring Healer and the only child of Shea Ohmsford and Heady Ohmsford.

Not much is known about Wil's early years except that he never once stepped foot outside Shady Vale, his home.

Quest to Save the Ellcrys

As Heady lay dying, she gave to Wil the Elfstones that had once belonged to his deceased father Shea, and told him that they contained magic. In her final breaths, she insisted that Shea was a good man, not the crazy person people thought him to be, and that Wil should "seek out the Druid."

After burying his mother, Wil resolves to leave his home in Shady Vale to study the art of healing at Storlock, over the protests of his uncle Flick Ohmsford. Flick urges Wil to throw away the Elfstones, and Wil pretends to comply, but he takes the talismans with him when he leaves the Vale.

Naive and out of his depth, Wil is nearly killed by a Troll soon after leaving Shady Vale, only to be saved, drugged, and robbed by the Rover girl Eretria. He is awoken by the Druid Allanon, who has come looking for him. Allanon reveals to Wil that he is a descendant of the royal House of Shannara and tasks him with protecting the Elven Princess Amberle Elessedil.

A year after Amberle Elessedil restored the Ellcrys, Wil Ohmsford is scarred by the loss of Amberle and his separation from Eretria. He has turned his back on his magical destiny and is living in Storlock, training to become the Healer he always wanted to be.

At a hospital in Storlock, Mareth arrives seeking treatment for a burned hand and is seen to by Wil. When Mareth sees him, she comments that she thought all healers were Gnomes, to which Wil says they made one exception. Prying, she asks what makes him so special, to which he replies nothing. Mareth claims that she tripped and fell into the campfire, thus getting her hand burned. The good news is that she'll live. He then gives her a balm to apply daily that will minimize the scar. As Wil turns to leave, Mareth tells him he looks familiar, but he declines to give her his name, indicating some caution on his part. After Wil has left, Mareth uses magic to heal the burn.

Later, Mareth comes up to Wil in a bar in Storlock and tells him that there's a bounty out for Wil's life. Wil whips out a knife and holds it against Mareth, saying that he had been fooled by dangerous women before and would not be fooled again. However, Mareth insists that she's not a bounty hunter, and that the only way she was even able to get into the bar to see Wil was because she killed one of the three bounty hunters who were already at the bar trying to get to him.

Wil and Mareth attempt to leave the bar, pretending to be a drunk pair looking to get off with each other for the night. Unfortunately, they are stopped by the two remaining bounty hunters, a man and a woman. Mareth and Wil engage them in combat, and while Mareth is able to overpower the woman fairly quickly, Wil slowly gets beaten back by the man. Wil is about to be stabbed when Mareth stabs the bounty hunter in the back, saving Wil. However, Wil did sustain a nasty cut on his torso, and they head back to his quarters.

Wil wakes up the next day to find that his home village of Shady Vale was attacked by the Crimson, which brought the survived from Shady Vale into Storlock for medical help. Wil searches amongst the villagers for his uncle Flick but does not find him. He does run into Dax, who says that he told to Flick to hide and that the Crimson is looking for Wil.

Back in Wil's quarters, Bandon's lead Mord Wraith appears and blasts Wil with magic, catapulting him out the window of his quarters. Wil is shocked when a very accurate illusion of his own self appears and lures the Mord Wraith away. Mareth appears, clearly having been the one to have conjured the illusion. She tells Wil to flee, but Wil stops her, demanding to know what she wants from him. The woman reveals that she wants Wil's help in finding the Druid, Allanon, because she claims that he is her father.

Changes Made for the TV Adaptation 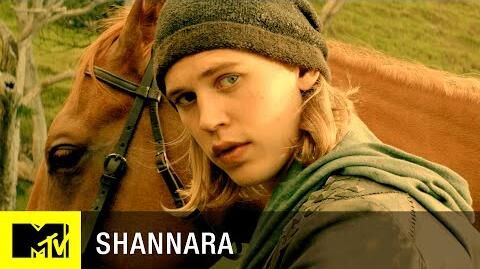 Wil Ohmsford is a main character in The Elfstones of Shannara. He is the grandson of the legendary half-Elf Shea Ohmsford and the grandnephew of Flick Ohmsford, though not by blood since Shea is Flick's adopted brother.

Due to the loss of his parents at an early age to fever, Wil set out to become a Healer. Much to the dismay of his uncle Flick, Wil chose to leave Shady Vale to study with the Stors, the legendary Gnome Healers at Storlock who were the best in the Four Lands.

Wil spent several years in Storlock, learning the language and the art of Healing from the Stors. His life changed when Allanon, the legendary Druid thought dead for fifty years, appeared in Storlock heavily wounded and needing assistance. After he is healed, Allanon asks for Wil's help, telling Wil that the Ellcrys, the sacred tree of the Elven people, was dying, and with her death the Forbidding that sealed away the Demons of the old world would fall. In order to send the Demons back where they belonged, the last member of the Chosen, Amberle Elessedil, must carry the seed of the Ellcrys to the Bloodfire so the tree can be reborn.

With the Demons aware of Amberle's existence and searching the Four Lands for her, she would need magical protection to survive. Allanon had to remain in Arborlon to aid the Elves, and so the only one who could help her was Wil and the legendary Elfstones that once belonged to his grandfather. Though dedicated to his studies as a Healer, Wil is convinced by Allanon and readily offers to protect Amberle from the Demons and accompany her on her quest.

However, during his adventures, after successfully using the Elfstones once, Wil sensed an unpleasant change within himself. He also discovered an internal resistance to the power of the Elfstones, which Allanon later explained had to do with the fact that his Elven blood was very thin, whereas Shea was half Elf and had no such issue. Wil eventually realized that he had also created a psychological block that prevented him from using the Elfstones, one created not just by his fear of the magic but also over his internal conflict over inflicting harm after having pledged his life to being a Healer.

He was later able to break through his mental block, destroying the Demon known as the Reaper. Wil then suffered a terrible loss, as Amberle, for whom he had developed feelings, became the new Ellcrys. After recovering from the long journey, Wil eventually married Eretria, a Rover girl who had become a part of his and Amberle's quest.

Despite breaking through the mental block that had prevented him from using the Elfstones, Wil continues to sense that they are changing something within him, and not necessarily in a positive way. The effects of the Elfstones on Wil become apparent after the birth of his children, Brin and Jair Ohmsford. The Elven magic that had become a part of Wil was transferred to the two siblings, manifesting itself in the form of the wishsong. Centuries later, various members of the Ohmsford line such as Par Ohmsford, Grianne Ohmsford, and Railing Ohmsford all have varying levels of mastery over the wishsong.

Although Wil is only one-eighth Elf, his Elven features are prominent enough that he is mistaken for a full Elf multiple times in the book and can pass for Amberle's brother. His resemblance to his grandfather Shea is often noted; Shea was described in The Sword of Shannara as having tousled blond hair and penetrating blue eyes.
Deutsch Français Polski
Community content is available under CC-BY-SA unless otherwise noted.