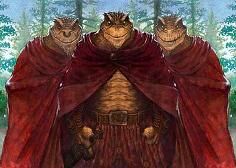 Mwellrets, or ‘Rets as they are called colloquially, are a subgroup of Trolls who adapted to live in the swamplands of the deep Eastland. They are mostly resistant to magic and have evolved reptilian physiologies, along with the ability to contort and alter their body size and shape.

Mwellrets returned to civilization much faster than the other Races, and they subjugated the Gnomes of the Ravenshorn Mountains. They forced their slaves to build a mighty fortress in the Ravenshorn called Graymark as the capital of their empire. The Mwellrets then condemned many thousands of Gnome slaves to death in the Caves of Night below Graymark.

The superstitious Gnomes believed the "lizard people" to command powerful magic that they could not withstand. Some Mwellrets such as Stythys command powers of persuasion and hypnosis, probably aided by some form of magic. Mwellrets use these powers to manipulate people of other Races, whom they refer to as "little peoples."

During the Second and Third War of the Races, the Mwellrets struck a bargain with the Warlock Lord where they sent Gnomes to serve in the Warlock Lord's army in exchange for the fallen Druid leaving the Mwellrets and their empire alone. However, the later fell prey to the Mord Wraiths, who caused them to sicken to a handful. The Mwellrets were driven from Graymark. The survivors established themselves at the fallen Dwarf citadel of Dun Fee Aran where they ruled the Gnomes who resided there. Their attempts to command the dark magic of the Ildatch were thwarted a few years after the War of the Ildatch by Jair Ohmsford (Indomitable). A number of Mwellrets later served as aids to the warlock known as the Morgawr.

The Mwellrets remained an insular people and played no role in the politics of the wider Four Lands. They did not contribute their knowledge and powers to forming the 1st Druid Council of Paranor along with the other races. The lizard people were all but unknown by most of the races, although Dwarves such as Elb Foeraker (Wishsong of Shannara) viewed them with extreme distrust. They typically concealed their unsettling appearances with cowls and cloaks.

Changes Made for the TV Adaptation

Retrieved from "https://shannara.fandom.com/wiki/Mwellret?oldid=15223"
Community content is available under CC-BY-SA unless otherwise noted.