"You're lucky. I have a soft spot for hopeless romantics."
―Garet to Eretria[src]

Garet Jax is a character in The Shannara Chronicles, based on the character of the same name in The Wishsong of Shannara. He is a skilled, sly, and charismatic bounty hunter known throughout the Four Lands as "The Weapons Master". Wise-cracking and with a roguish charm, the only thing Garet Jax likes more than money is a good fight.

Captured by Rovers, Lyria and Eretria are tied up when Garet Jax comes to their rescue. When he saves Lyria and Eretria from Rovers, it quickly becomes clear that his motives are not altruistic: his aim is to capture Lyria and take her back to her home. When Eretria puts up a fight, Garet knocks her out easily and agrees not to kill her if Lyria comes with him peacefully.

Bounty hunter Jax arrives at the town of Leah, and tells queen Tamlin that he’s returned with her daughter, Lyria. When Tamlin offers him a permanent position by her side, Jax declines the offer of a permanent position and takes his reward to the royal bordello. When he arrives at the bordello, he has two companions for the night when a bordello waiter draws a knife on him. It is revealed to be Eretria. She asks after Lyria, but he overpowers her easily. However, when Garet realizes that the Rover girl is in love with Lyria. He confesses that he has a weakness for hopeless romantics, so he tells her who Lyria really is and where she can be found.

Garet Jax, whom Eretria has paid to help her find Wil, and Mareth confront each other outside the barn, when Wil and Eretria approach them after their reunion. Garet introduces himself as the “Weapons Master” to Mareth and Wil. Eretria reveals to the rest that she paid Garet the diamonds given to her by Tamlin to help her track Wil to Shady Vale. She greets Mareth, calling her “another pair of short tips”.

When Wil says he needs to find Allanon, Mareth says he's changed his tune, but Wil says it's only because he needs to save his uncle, Flick. However, Eretria says Allanon was captured in Leah by the Crimson and taken to Graymark. Garet recognizes Graymark as an old Gnomes fortress in the Ravenshorn Mountains, but when Wil asks him to guide them there to find Allanon, he refuses, saying that he doesn't do causes, ideology, politics, or guilt. He reconsiders when the others goad him, demanding that he prove he's not afraid by getting Wil into Graymark. 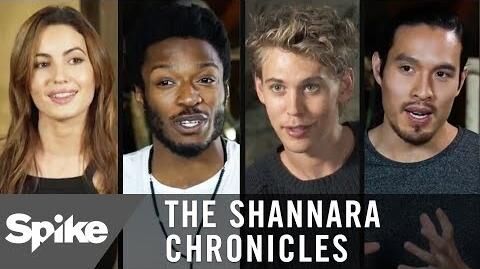 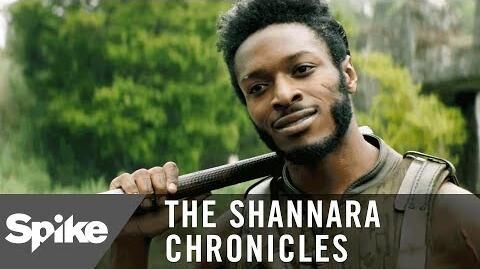 Garet Jax is a fictional character from The Wishsong of Shannara. He was a renowned Weapons Master, skilled in every weapon known to man, and the protector of Jair Ohmsford.

It was said that no one could defeat Garet Jax, and many people who saw his battles supported that claim. He had extraordinary speed and agility, and was famous throughout the Four Lands for his skills. He was even training soldiers to fight by the age of ten. His aim in life was to find a opponent that could match him in battle.

Quest to Save Brin Ohmsford

Garet Jax first appears as a cloaked man drinking from a stream when Jair and his nine Gnome captors are traveling through the Black Oaks. He rescues Jair after killing six of the nine, knocking out the leader Spilk, and chasing away one more. The remaining Gnome, Slanter, had known who the cloaked figure was and didn't even bother to lift his knife. Garet Jax decides that he will protect Jair and that the three of them should travel to the Eastland together, and Slanter agrees, though he does so reluctantly.

As Jair's protector, the Weapons Master later leads the party traveling towards Heaven's Well in support of Jair's quest to save his sister Brin Ohmsford and restore the Silver River to its original, healthy state.

When they are near Heaven's Well, Garet Jax finally meets the opponent he has been waiting for: a Jachyra. He engages the monster in battle, allowing Jair to reach Heaven's Well and cleanse the waters. When Jair has finished and doubles back, he comes across the Weapons Master's body. It becomes clear that even though he was killed by the Jachyra's poison, he managed to kill the beast before dying.

Garet Jax is described as having the look of an ordinary Southlander, with a face brown and creased by sun and wind, and light hair turned almost silver. He dresses completely in black clothing and carries a polished staff of black walnut. He has an assortment of concealed weapons on him, including a slender sword and several long daggers. His weapon of choice is a longsword, which he uses to slay the Jachyra.
Retrieved from "https://shannara.fandom.com/wiki/Garet_Jax?oldid=15044"
Community content is available under CC-BY-SA unless otherwise noted.