Eventine Elessedil is a character in The Shannara Chronicles, based on the character of the same name in The Sword of Shannara and The Elfstones of Shannara. He was King of the Elves and a hero of the Third War of the Races that defeated the Warlock Lord. He had three sons, Aine, Arion, and Ander, a sister named Pyria, and a granddaughter Amberle.

As a young King Eventine fought in the War of the Races alongside the Druid Allanon and Shea Ohmsford, thirty years prior to the events of The Shannara Chronicles. After the war, he worked successfully to convince the Elven people that magic was only a myth, in the hopes of ensuring his people's security.

Later in life Eventine watched Aine, his oldest son and heir, get killed at the hands of the Gnome assassin Slanter.

The War of the Forbidding

Eventine is shocked when his granddaughter Amberle successfully completes the Gauntlet and becomes a member of the Chosen. However, when Amberle is escorted back to Arborlon by Allanon and Wil Ohmsford after rejecting her duties to the Ellcrys, he readily accepts Allanon's advice to allow Amberle to go on a quest to restore the Ellcrys and the Forbidding, rejecting Arion's call for a military solution to the problem of the Demons.

Eventine had been intending to abdicate the throne to Arion, but his belief that no king should abdicate in the middle of a crisis, plus his observations of Arion's distrust of Allanon and harsh words for Amberle convinces Eventine to stay on the throne longer.

It is during a discussion with Arion about giving up the throne that Eventine is killed by the Changeling, which had taken on Arion's form. The Changeling then assumes Eventine's form and orders Arion to retrieve the Warlock Sword from the tunnels beneath Arborlon and use it against Allanon. After the Druid is presumed to have been killed by the blade, the false Eventine orders Arion and Ander to fight the Dagda Mor alone, which results in Arion's death. Ander, who is saved by Allanon, returns to the palace and kills the Changeling.

Add a photo to this gallery 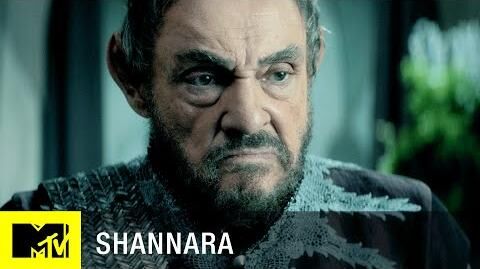 The Sword of Shannara

Eventine Elessedil is a character in The Sword of Shannara and The Elfstones of Shannara. He was King of the Elves and a hero of the Third War of the Races, during which the Warlock Lord was defeated. He had three sons, Arion, Ander, and Aine, and a granddaughter by Aine named Amberle.

Eventine was one of the most beloved Elven Kings, surpassed perhaps only by Jerle Shannara. He was an ally to Allanon during the fight against the Warlock Lord, acting to protect the Sword of Shannara. However, when a Gnome war party makes a break for the Northland with the Sword, Eventine engages them and is captured in the process. He is later saved from the main Northland army camp by Flick Ohmsford, and watches the attack on Tyrsis from a distance while waiting for the Elven army.

Fifty years later Eventine is over eighty years old, still King of the Elves in Arborlon, and he has had three sons and a granddaughter. However, Aine has been dead for over a decade, while his granddaughter Amberle has disgraced herself by spurning her duties as a member of the Chosen. Eventine favors his eldest son and heir Arion, a handsome athlete and fighter, while leaving his more quiet and reserved younger son Ander to his own life outside the palace.

However, things change when the Ellcrys begins to die, releasing the Demons into the Four Lands: Eventine begins to see more of himself in Ander's wisdom and finds himself at odds with Arion's rejection of Amberle when she returns to Arborlon. With the support of Allanon and Ander, Eventine leads the war effort to defend Arborlon while Wil Ohmsford and Amberle attempt to restore the Ellcrys by searching for Safehold and the Bloodfire. During the initial battle against the Demon horde, Eventine is wounded and knocked unconscious and Arion is killed. Ander become the de facto leader of the Elves, a situation he never thought he'd be in.

Eventine revives when the Elves return to Arborlon, only to learn of Arion's death and to see hatred in the eyes of his loyal wolfhound, Manx. Disturbed and changed inside, he returns to battle at Ander's side, only to be wounded again. This time, he awakens to find Manx, who had actually been replaced by the Changeling some time ago, about to attack him. Proving himself in one last battle, Eventine manages to deliver a mortal blow to the Demon before being struck himself and falling unconscious. He passes away peacefully after Amberle restores the Forbidding and the war ends, awakening long enough before dying for Ander to tell him the Ellcrys is restored and the white lie that Amberle is safe.

Twenty years later, during the battle against the Ildatch and the Mord Wraiths, Eventine's son King Ander sends a command of Elven Hunters to Culhaven under the command of his son Edain Elessedil. Despite Edain's death, Eventine's line would continue on, culminating 300 years later in the great Elf Queen Wren Elessedil.
Retrieved from "https://shannara.fandom.com/wiki/Eventine_Elessedil?oldid=15043"
Community content is available under CC-BY-SA unless otherwise noted.