Shannara Wiki - Exploring the Magical World of Shannara
Register
Don't have an account?
Sign In
in: Episodes, Season 1 Episodes

"Druid"
"Ellcrys" is the tenth episode of The Shannara Chronicles.

Wil and Amberle race to reach the Ellcrys while Allanon and Ander lead the Elven army in an epic battle against the Dagda Mor and his Demon horde.

Trapped within the Bloodfire, Amberle experiences a powerful vision as the true nature of her role in the unfolding events is revealed to her by the spirit of the Ellcrys. Wil uses the power of the Elfstones to heal Eretria, who then sacfrifices even more of her blood to allow for Amberle's return. With Trolls in hot pursuit, the group flees toward the surface, and Eretria courageously traps herself behind in an effort to allow her companions to escape, with her fate left unknown.

In Arborlon, Bandon has been locked away after violently turning on Catania, but her kind nature compels her to visit despite the darkness looming inside him. Bandon takes advantage of this kindness, convincing a guard to free him by using her life as a bargaining chip. In the process of his escape, the guard pushes Catania out of the way which sends Bandon into a frenzy of rage. This results in him savagely beating the guard to death in front of a horrified Catania, after which Bandon simply tells her "He shouldn't have touched you." Elsewhere in Arborlon, Ander and Diana share a tender moment before heading into battle.

As they make haste back to Arborlon, the duo come upon a horde of demon warriors and must hide out until dark when they can sneak past them. Amberle leads them to a nearby cave she knows about where they hold up and speak of the future, profess their love, and finally share an intimate moment. However, she is not yet able to share the troubling news of the role she is destined to soon play. As the Demon army attacks Arborlon, the Elves and Gnomes fight together to defend the Ellcrys. In the heat of battle, a powerful Demon warrior emerges, who is revealed to be a resurrected Arion. Stunned by this revelation, Diana hesitates, and to Ander's horror Arion runs her through. Ander is then able to sink his blade into what is left of his brother causing the spell to lift briefly - long enough for Arion to beg his brother to release him from demonic bondage. A conflicted Ander says a final goodbye and obliges.

The timely arrival of Allanon and Slanter saves Wil and Amberle from a group of Demons and the group is able to make it back to the Ellcrys. The Dagda Mor blocks their way, and Allanon fights a losing battle with the evil Druid in order to buy some time. Amberle finally reveals the truth to Wil, that she must sacrifice herself in order to become the new Ellcrys. The Dagda Mor bests Allanon and knocks him aside, but Wil is able to hold the Demon leader off with the power of the Elfstones long enough for Allanon to destroy him. Amberle makes her sacrifice and becomes the new Ellcrys. The Forbidding is renewed, banishing the Demons and saving the four lands. Wil - confused and heartbroken - confronts Allanon, who admits to his prior knowledge of Amberle's fate. He tells Wil his father would have been proud of him, and reminds him that all magic comes with a price.

As the episode concludes, a dark new threat is revealed as a black-eyed Bandon is seen wielding the Dagda Mor's evil blade. Wil makes his peace with Allanon and decides on returning to Safehold in order to learn the fate of Eretria, and rescue her if she survived. 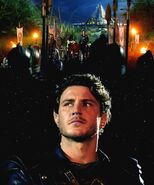