Shannara Wiki - Exploring the Magical World of Shannara
Register
Don't have an account?
Sign In
Advertisement
in: Demons, Males, Servants of the Void, Characters from The Sword of Shannara trilogy
English

The Dagda Mor was the main antagonist in the first season of The Shannara Chronicles.

Not much is known of the Dagda Mor's background, other than that he was an Elven druid in the days before the Age of Man who was corrupted by the Ildatch, an artifact of immense dark power. He became so powerful that he was able to unite the demonic hordes in an attempt to destroy the ancient elves and conquer the world. He was defeated when the elves created the Ellcrys; sealing him and the thousands of demons that followed him, into an alternate dimension known as the Forbidding. 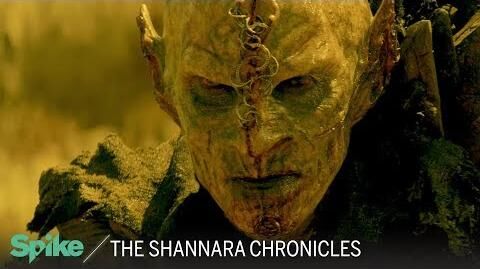 The Dagda Mor is a character in The Elfstones of Shannara. He is the King of all Demons in the Forbidding.

After the Ellcrys dies the Dagda Mor attacks the Elven nation with a massive Demon army. He sends the Reaper to kill all of the Chosen and the Changeling to spy on the Elves so that the Demons can know what they are planning. In the end the Changeling was defeated by Eventine Elessedil, the Reaper died at the hand of Wil Ohmsford, and the Dadga Mor himself was destroyed by the Druid Allanon.

During his time, the Dagda Mor was by far the most powerful Demon within the Forbidding, except for perhaps the Reaper. It is possible that other Demons like Tael Riverine have since surpassed his strength.