Shannara Wiki - Exploring the Magical World of Shannara
Register
Don't have an account?
Sign In
in: Pages using duplicate arguments in template calls, House of Elessedil, Males,
and 2 more
English

View source
Ander Elessedil is a main character in The Shannara Chronicles, based on the lead character of the same name in The Elfstones of Shannara. He is the youngest son of the Elven King Eventine Elessedil, preceded by his oldest brother Aine and next oldest brother Arion. He has an aunt called Pyria and is uncle to Aine's daughter Amberle.

Not much is known about Ander's early life, except that as a Prince of the Elves he would have been raised in the palace at Arborlon.

Seven years before the Demons began reappearing in the Four Lands, Ander witnessed the death of his brother Aine at the hands of the Gnome assassin Slanter. Wracked by guilt, he turned to alcohol to cope. His relationship with Diana Tilton suffered due to his behavior, and as a result Diana left him and moved on to a relationship with Ander's brother Arion.

The War of the Forbidding

When Amberle returns to Arborlon after spurning her duty to the Ellcrys, Ander is the first to show his support for her, unlike his brother Arion. Ander also trusts his father's judgment and the advice of the Druid Allanon to aid Amberle on her quest to restore the Ellcrys, whereas Arion distrusts the Druid and advocates for a military solution to the problem of Demons that the Elves are facing.

Without the knowledge of the King, Ander also frees Slanter from the prison he'd been languishing in since Aine's murder in return for his assistance and the assistance of the Gnomes in the fight against the Demons. While Slanter initially double crosses Ander and flees, he ends up returning after seeing the Demon horde for himself and vows to speak to the Gnomes about the situation and of Ander's honorable nature.

Later, Arion and Ander are tricked by the Changeling, who had killed and taken the guise of their father, into facing the Dagda Mor alone. They are quickly overpowered by the Dagda Mor, who kills Arion easily. Ander is only saved by Allanon's assistance, and he returns to Arborlon, where he kills the Changeling.

With the deaths of Eventine and Arion, Ander becomes the de facto King of the Elves. He drinks heavily after their deaths, intending to abdicate the throne to Kael Pindanon, a member of the Elven High Council, at his brother and father's funeral. It is only after some stern words from Allanon and memories of his family members dying with honor that he changes his mind while speaking at the funeral, vowing to fight for the Elves as their king, and to battle bravely in the name of the Four Lands.

At Ander's urging, Commander Tilton travels to Gnome territory to meet with Slanter and convince the Gnomes to join the Elves in the battle against the Demons. While the Commander is away Kael Pindanon stages a bloodless coup with the Black Watch under her lead and throws Ander in prison.

Diana returns to Arborlon with Slanter, who frees Ander from prison. Together with Allanon, the Commander, and a cadre of Gnomes, Ander presents the new alliance to the High Council. The Black Watch, upon seeing the work Ander has done to bring in reinforcements against the Demons, quickly apologizes to the King and falls back in line under his rule and under Diana's command. Ander declares that the only way to win the war is to revive the Ellcrys and restore the Forbidding.

Before the last stand against the Demons to protect the Gardens of Life, Ander confronts Diana and tells her how sorry he is that it took until the end of the world for him to realize what a fool he's been, in reference to their past romance.

Later, during the actual battle against the Demons, the Commander is caught off-guard when a Demon's helmet falls off, and she sees that the Demon is actually Arion. It becomes apparent that Arion, after being stabbed by the Dagda Mor, had his mind taken over by and was forced to fight for the Demons.

Diana's moment of hesitation is enough for the Demon-influenced Arion to have time to kill her with his sword. When Arion is later confronted by Ander, he has a moment of lucidity and begs for his brother to kill him. Ander, though distraught, complies with his brother's wish, freeing him from his mental prison.

After Amberle restores the Forbidding, Ander has lost all of his remaining family members to the Demons, as well as his love Diana. However, he has helped to insure the Four Lands' safety and proved himself as King of the Elves.

Rise of the Crimson

A year later, the Elves are still struggling. While the war against the Demons was successful, it also bankrupted the Elven treasury. Without proper resources and without any willing aid coming from the other Races, Ander is unable to help his people find new homes and rebuild communities that were lost.

In the midst of this uncertain climate, a new group called the Crimson has emerged. They are extremist Elven soldiers who are fighting back the re-emergence of magic in the Four Lands by hunting down and killing all magic users. The Crimson is led by Riga, formerly a revered general in Eventine's army.

When Ander finds magic users killed and strung up against trees with the insignia of the Crimson stamped on their foreheads, he declares that Riga must be found and brought to justice. Edain and Catania caution him, warning that Riga's beliefs about magic users are shared by many. 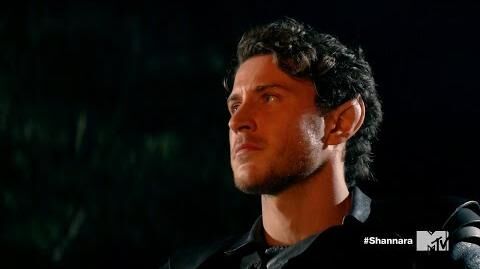 The Elfstones of Shannara

Aine and Arion were very close, but when Aine died eleven years prior to the events in Elfstones his daughter Amberle went to Ander for support and comfort, arousing jealousy in Arion and beginning a conflict between the two surviving brothers. Arion blamed Ander's influence when Amberle spurned her duties as a member of the Chosen. Seeking seclusion, Ander moved out of the palace but remained in the Elven city of Arborlon.

When the Ellcrys begins to die, Ander is the first one alerted and takes the messenger to Eventine. He is also the first to discover the deaths of the Chosen, and to meet the Druid Allanon. Slowly but surely, he becomes a reliable aid to his father: when Amberle returns to Arborlon and is brought before Eventine's advisors by Allanon, Ander is the first to stand with her while Arion tells the Druid to send her away. Ander ends up supporting Aine's daughter on her quest to restore the Ellcrys, while Arion does not.

Ander meets the Legion Free Corps, led by Stee Jans, in his father's place. He later accompanies Eventine to Halys Cut, where their army engages the Demons. When Eventine is gravely wounded and Arion killed at the Worl Run, Ander is forced to lead the Elves and he commands the combined forces in the fight against the Demons.

After the Forbidding was restored, Ander had become King of the Elves. He was the last of the House of Elessedil alive: Eventine had passed way from mortal wounds, Arion had been killed in battle without leaving behind any children, and Aine was long dead with his only child Amberle becoming the new Ellcrys. Ander was the one watching as Wil Ohmsford departed Arborlon with his future wife Eretria.

Twenty years later, during the battle against the Ildatch and the Mord Wraiths, Ander sent a command of Elven Hunters to Culhaven under the command of his son Edain Elessedil. Despite Edain's death, Ander's line would continue on, manifesting 300 years later in the great Elf Queen Wren Elessedil.

Ander is described in Elfstones as being short and dark, in contrast to his brother Arion, who is described as tall and fair.
Deutsch Français
Community content is available under CC-BY-SA unless otherwise noted.