Amberle Elessedil is a main character in The Shannara Chronicles, based on the lead character of the same name in The Elfstones of Shannara. She was a princess and the only child of Aine Elessedil, the oldest son of Eventine Elessedil, King of the Elves.

Amberle's mother died while giving birth to her. She was raised by her father thereafter, becoming very close to him.

When Amberle was a child, she would race her friend Lorin to the palace sanctuary where the sentient and magical tree called the Ellcrys resided. She beat Lorin to the tree, and when she touched it, she received a vision from the tree for the first time, which was an image of her father's death. After being kicked out of the sanctuary, Amberle walked with her father, Aine Elessedil to her room. On the way they saw a body on the ground of an unidentified elf and Aine tried to send her away to safety. However, she went to the King's chambers, where she witnessed the murder of her father by the Gnome assassin Slanter.

Due to an idea planted in her mind by her father just before he died, Amberle decided to become the first woman to run the Gauntlet and become a Chosen.("Reaper")

By successfully running the Gauntlet, Amberle is the first woman in memory to qualify to be a member of the Chosen, a group of Elves tasked with protecting the sentient and magical tree called the Ellcrys. Almost immediately she begins receiving visions of death and destruction from the tree, and she becomes disturbed enough by the Ellcrys to spurn her duty as a Chosen and leave the Elven city of Arborlon. After watching her great-aunt Pyria Elessedil get killed by a Fury and after being saved by Allanon and Wil Ohmsford, Amberle is convinced to return to Arborlon, and she ultimately decides to take on the quest of restoring the dying Ellcrys. 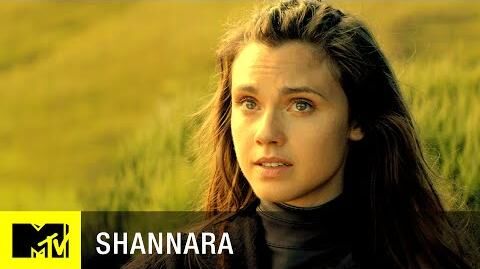 The Elfstones of Shannara

Amberle Elessedil is a main character in The Elfstones of Shannara. She is a princess and the only child of Aine Elessedil, the youngest son of Eventine Elessedil. Amberle is selected by the Ellcrys to be a member of the Chosen, a group of Elves tasked with protecting the sentient tree. The first female member of the Chosen selected in centuries, Amberle at first enjoys the special bond with and the extra attention she receives from the Ellcrys. However, she soon becomes disturbed by the tree's overbearing nature and her relationship to it, and she spurns her duty as a Chosen and leaves the Elven city of Arborlon, choosing instead to teach children in Havenstead. She is later convinced by Allanon and Wil Ohmsford to return to Arborlon, and she ultimately decides to take on the quest of restoring the dying Ellcrys.

Not much is known about the early life of Amberle, except that her father Aine Elessedil died young, eleven years before the events of Elfstones, in a hunting accident. When Wil and Allanon meet her in Havenstead, she is a teacher of biology and ecology for young children, educating them about the entirety of life and the natural world.

Quest to Save the Ellcrys

Amberle initially had little trust in Allanon and Wil when they explained they had to take her back to Arborlon. She only agrees to leave Havenstead with them after Allanon warns that Demons are approaching the town, and continues to believe that she wouldn't be considered acceptable by the Ellcrys for the quest to save it anyway. After enduring a meeting of the Elven High Council where she is both criticized for her decision to spurn her duties and praised for returning bravely to Arborlon, she acquires the Ellcrys seed. It is only then she agrees to go on the long journey with Wil to find Safehold and the Bloodfire.

Over time Amberle opens up to Wil, slowly revealing more about herself. The two eventually end up placing their trust in each other, and the growing closeness between them drives her to reveal why she rejected her status as a Chosen: the Ellcrys had more interest in her than in any of the other Chosen, and had showered attention on her. The tree had revealed secrets of the past and of ancient history that only she knew, to the extent that Amberle felt she was losing herself as a person and that she was just an extension of the Ellcrys. Unable to handle the fear and pressure and ostracized by most of the other Chosen due to the special treatment she was given by the Ellcrys), Amberle abandoned her duty.

For his own part, Wil is struck by feelings of inadequacy and doubt: doubts as to whether or not he would have the ability to live up to his grandfather Shea Ohmsford's legacy as a hero, doubts about his ability to use the Elfstones, and doubts about his ability to kill when he had pledged himself to the life of a Healer. During their quest Wil and Amberle support and comfort each other over their shared fears, and near the end of their journey, in the dungeon of the witch Mallenroh, they vow to see their journey to its conclusion together.

But instead of healing the Ellcrys at the end of their quest, Amberle is actually transformed into a new Ellcrys, thus restoring the Forbidding and sealing the Demons behind it once more. The loss of Amberle causes Wil to fall into a deep depression, one that is intensified by the fact that Allanon had chosen to not disclose this aspect of the Ellcrys' restoration, and the fact that Amberle herself did not tell the truth to Wil once she realized the full extent of their quest herself. Wil eventually recovers and goes to visit the newborn Ellcrys one last time before leaving Arborlon. Years later, in The Wishsong of Shannara, it is revealed that Wil and Eretria have married and had children.

Amberle lives on as the Ellcrys for centuries. The Ellcrys dies again during the events of Witch Wraith.

Amberle is repeatedly described throughout Elfstones as having "chestnut" brown hair and green or sea-green eyes.